Sneak Peek into the Memories of Bonnie Doon Book 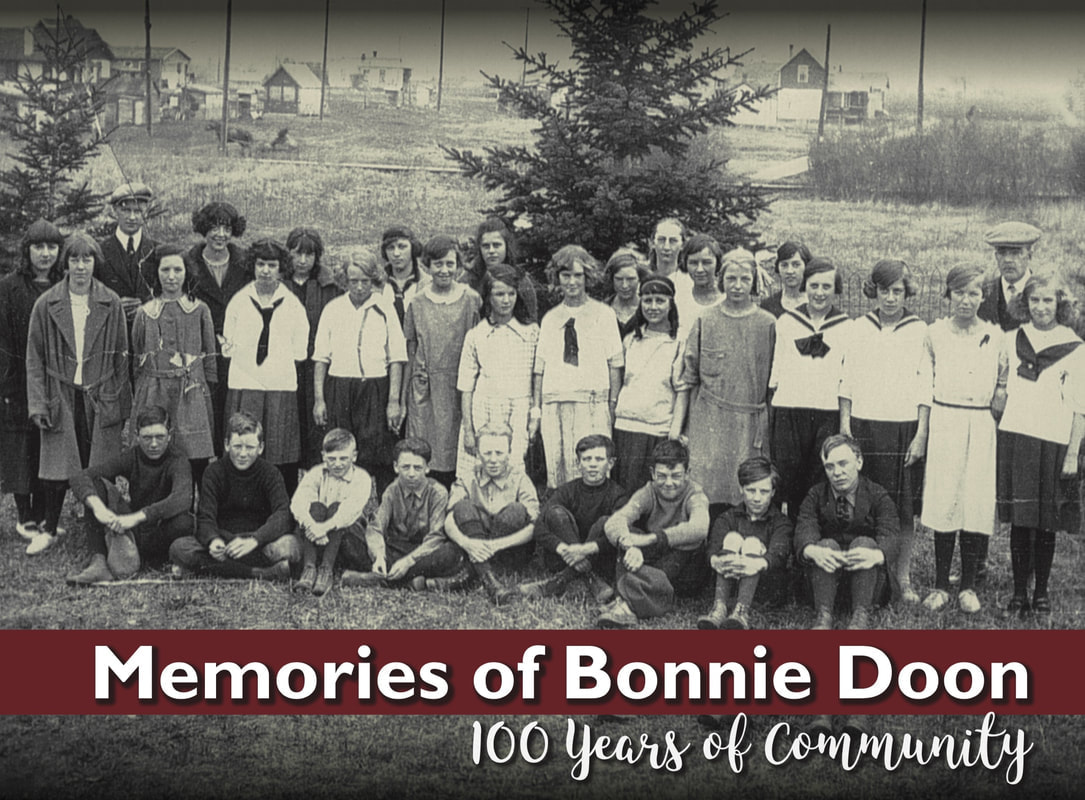 The book ‘Memories of Bonnie Doon’ provides a glimpse into the history of one of Edmonton’s oldest neighbourhoods and is based on the memories of residents of Bonnie Doon, as told to community volunteers.  From the earliest history of First Nations and Metis families to the opening of Rutherford School in 1911 and the travels of the Bonnie Doon Street Car, Memories of Bonnie Doon commemorates the past of this much loved community, located north of Whyte Avenue next to Mill Creek Ravine. It was published in 2019 to celebrate Bonnie Doon Community League's 100th birthday.

In 2015, a subcommittee of Bonnie Doon's Social Committee began recruiting volunteers to interview Bonnie Doon seniors, in order to preserve their stories.  What we have now is a huge book of stories and memories of life in this area from the late 1800s till now. Although much has changed, much has stayed the same – kids in Bonnie Doon love to play in the ravine and the playground; they love to get wet in Mill Creek pool and our spray park; they love to pull pranks. And the adults continue to work hard, look after their gardens and the ravine, and build community.

In this fabulous book, you will read about the people who first roamed the area we know as Bonnie Doon and Mill Creek Ravine, hunting, berry picking, having pow-wows, and the people who bought the land that had been granted to the Papaschase.  You will read how the neighbourhood evolved after A.C. Rutherford, who owned a huge chunk of this area, up and left to build his dream home elsewhere. You’ll find out how this neighbourhood got its name and what the Dawson Huts were.

You’ll read about midwife Betsy Brass, who delivered many babies in the area in the late 1800s, and Alberta Game Farm founder/Bonnie Doon kid Al Oeming and his connection to Stampede Wrestling. Bonnie Doon had its own Group of Seven: seven hardworking women who catered events in the hall to pay off its debt.

You will read about Earl Anderson and his friends who put street signs on Whyte Avenue that diverted traffic down to Mill Creek pool (then hid in the trees and laughed when the cars came down the hill trying to figure out where to go).

The ravine had a shanty town (near a dump) in the land at the bottom of Connors Road, where widow Violet Rawson, who had squatter’s rights, stayed on after everybody else had been cleared out. She remained in her green cottage, nestled between the creek and a mountain of garbage, until she died in 1965. Only then did the city put in the interchange at the bottom of Connors (and extend the road east of 95th Street).

You will learn about the coveted Bulldog Pass, about the millions of eggs produced and dried here in the city before being shipped overseas, about the dairy farms and gardens that grew up here, about the early residents who built their own homes (and sometimes moved them after they were in place), about the black “snow” of the 1970s. You’ll read about Isabel the cow of 87th Avenue.

What you really will appreciate knowing is that Bonnie Doon was a muddy place – and our mud is especially slippery. Getting up and down Connors or through the ravine was treacherous. Even the wooden sidewalks were slippery. People wiped out a lot. It took the residents a long time to convince Edmonton that they needed better roads, real sidewalks, and a decent bridge or two. Much has changed, and much has stayed the same.